A 5 mile circular route that will walk you through Clevedon’s history. From town to countryside, sea front and of course, Clevedon Pier, this walk is an interesting look at how the town has survived wars from as early as the 9th Century. Many thanks to Phil Curme for this fascinating stroll through time. 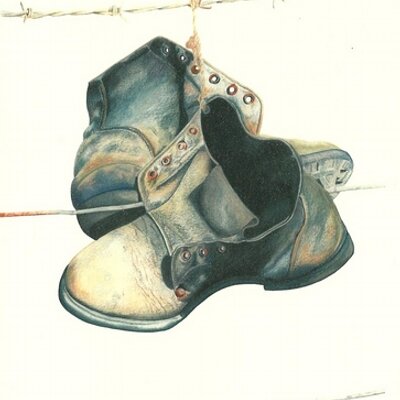 Start: From your starting point at Six Ways, head north up Bellevue Road and follow the sign to the Zig-Zag path.

At the seating area halfway up, turn around to admire a stunning view of the Bristol Channel, the Welsh Coast and, on a clear day, North Devon.

Stop 1: Viking, French and German Raiders. The two islands Steep and Flat Holm were used as staging posts for Viking Raids in the 9th Century. More recently they were fortified to protect the ports and harbours of the Severn estuary from French and German invaders. 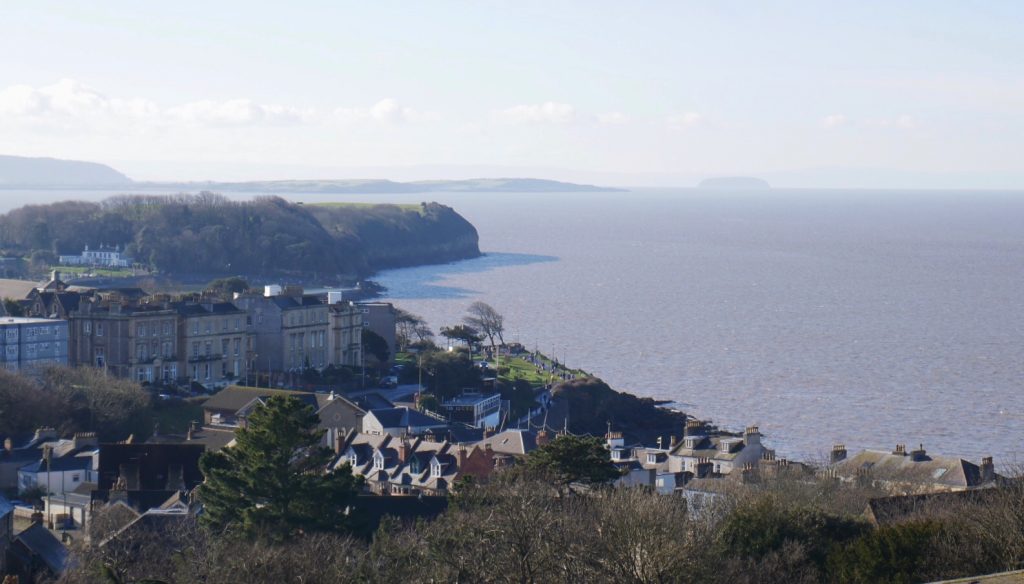 Upon reaching the top of the Zig-Zag, cross Dial Hill Road and take the footpath directly ahead. About 100 metres in, take the fork to the right and proceed up to the top of Dial Hill where you can enjoy panoramic views of the surrounding countryside.

Stop 2:  Cold War Horror. This is the site of one of the UK’s 1,563 Royal Observer Corps (ROC) Nuclear Fallout Bunkers. It was built so that ROC personnel could enjoy a degree of safety whilst monitoring the effect of a nuclear blast in the Bristol area. The site was operational from 1959 to 1991, but nothing remains of it now apart from a few pieces of metalwork hidden in the brambles. 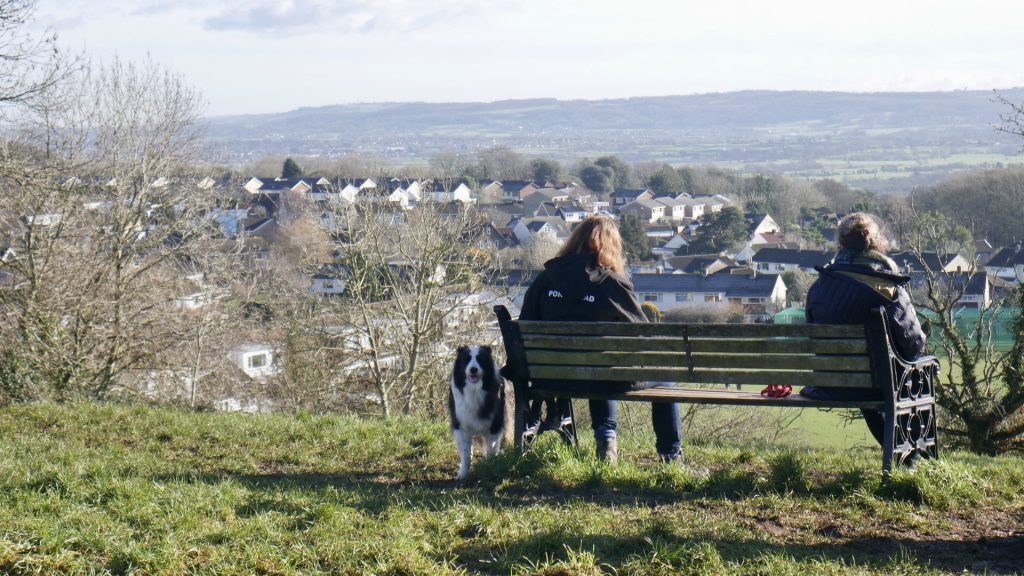 Proceed down the hill taking the path which runs along the edge of the Cricket Field. Turn left onto Esmond Grove and then right onto Old Park Road. Cross the junction with Thackeray Road and continue on Old Park Road which veers off to the left. After a couple of hundred metres take the footpath directly ahead at the point where the road bends to the right. Go through the metal kissing gate at the bottom and follow the winding path down the east side of Strawberry Hill. Watch out for lovely views of All Saints Church nestling in Swiss Valley.

At the bottom of the path where it meets a metalled road, turn right and walk down to the junction. Turn right again and you will see the East Clevedon Shrine.

Stop 3: The First World War Remembered. Wayside Cross built as a War Memorial and unveiled on Saturday, 27 July 1918. The names of All Saints parishioners killed during the First World War are inscribed on paving slabs. Amongst those commemorated is Commander Lionel Henry Shore R.N. (son of Lord and Lady Teignmouth) who went down with his ship, HMS Invincible, at the Battle of Jutland.

Continue walking south until you reach a roundabout just beyond one of Clevedon’s oldest pubs, The Old Inn. Just before you reach the pub, look out for the imposing white house hidden behind the long stone wall directly opposite the entrance to the car park. For many years this house, then called ‘The Grove’, was the home of Lieutenant Colonel Daniel Burges VC, DSO. He was awarded the Victoria Cross for outstanding leadership under fire whilst commanding the 2nd Gloucestershire Regiment in the Balkans during the final year of the First World War. 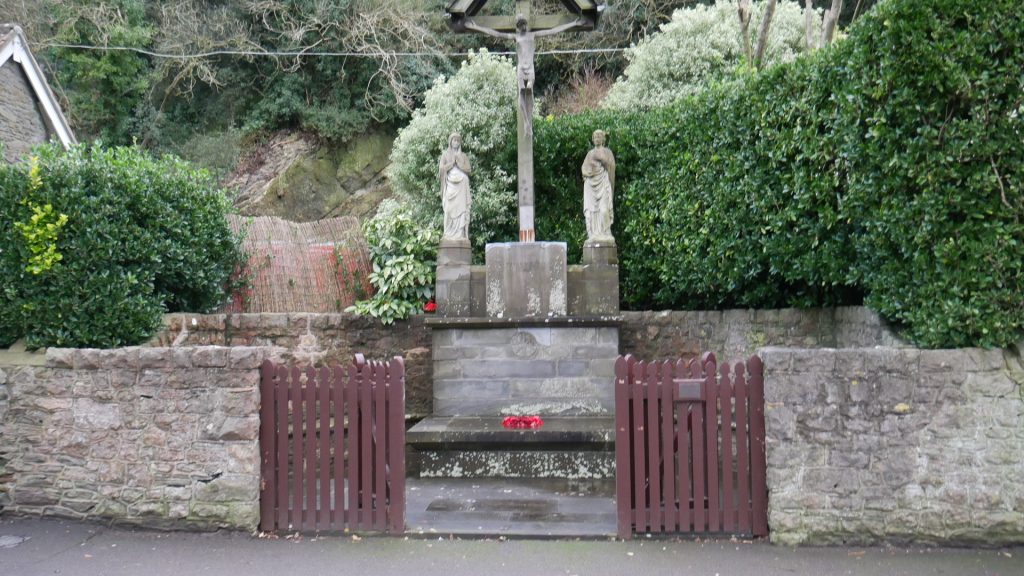 Turn right and follow the sign to Christchurch up Highdale Road. As you walk up the hill, look out for Mount Elton (formerly the residence of Lord and Lady Teignmouth, mentioned previously) on your right and a lovely view of the Mendip Hills on the left. At the top turn left and walk down Chapel Hill. Proceed down the hill until you reach Marston Road on the right hand side. The Clevedon British School Memorial is just around the corner.

Stop 4: Old Boys in the Trenches. The memorial is set into the wall at the entrance to Chapel Court which was built on the site of an old school. Those listed are old boys killed in the First World War. The names include the May brothers, both officers. They joined the Gloucestershire Regiment shortly after the start of the War.

Walk to the bottom of Chapel Hill passing The Bristol Inn and at the bottom turn right and then left at the clocktower. The Railway Memorial is on the right hand side just beyond the traffic lights. 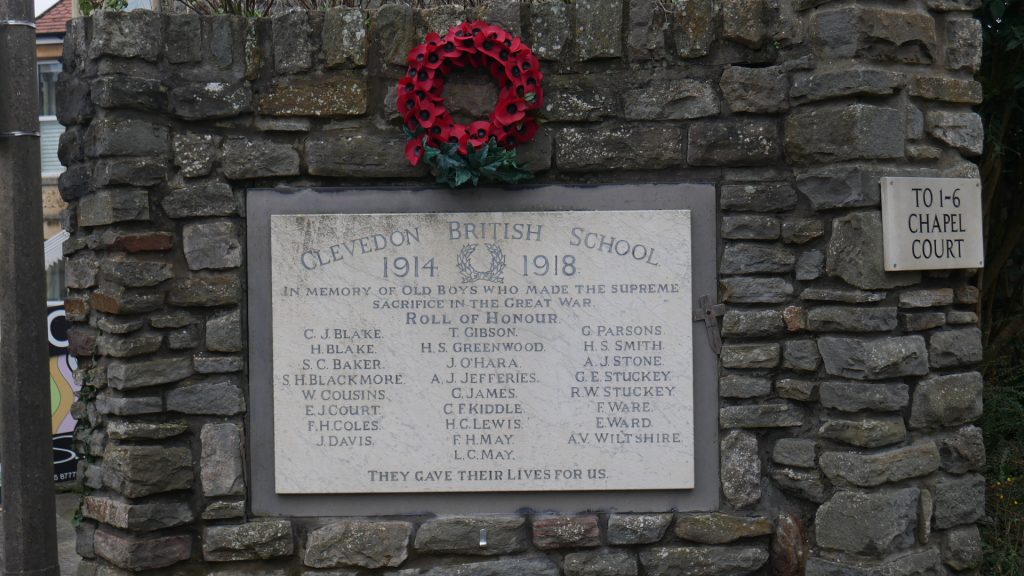 Stop 5: Fighting for King and Country. This modern memorial close to the site of Clevedon’s Great Western Railway Station (now demolished) commemorates the thousands of men and women who travelled to France and Belgium to serve during the two World Wars. Across Queen’s Square on the far wall of what is currently a B&M store there is a large black and white photograph of the station as it was in its heyday. The information board on the side of the nearby Conservative Club concerns the Portishead, Clevedon and Weston-super-Mare Light railway which – unlike the adjoining GWR station – was not used for military purposes. 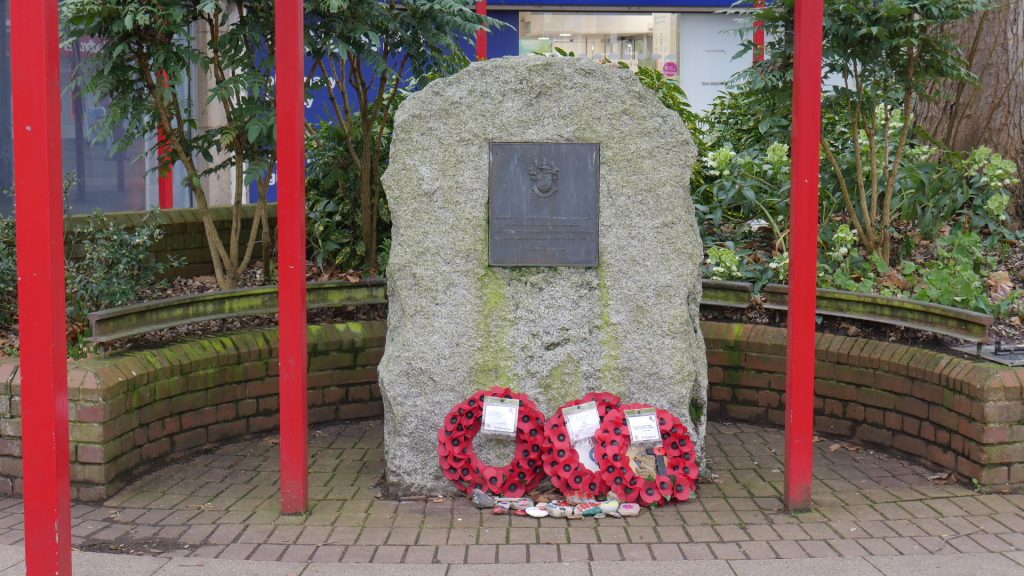 Follow the road to the right passing by Queen’s Square and the Baptist Church. After passing a rather striking steam train mural turn left into Old Park Road. Cross the road and pause once you reach the junction with Hillside Road. 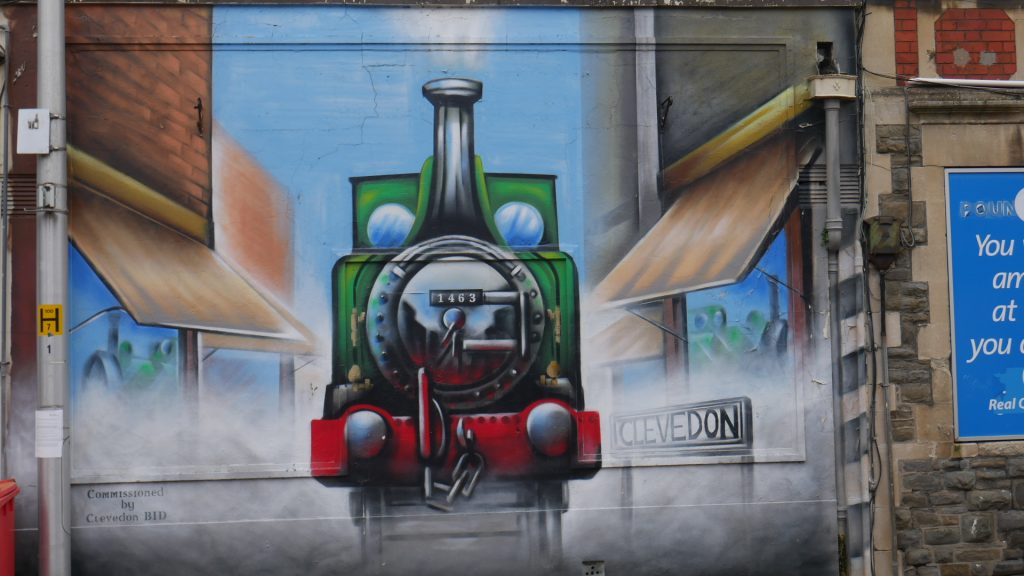 Stop 6: The Clevedon Blitz. Standing on the corner adjacent to Clevedon Library you can see shrapnel damage on the facade of Clevedon’s historic Curzon Cinema. On the 4th Jan 1941, the German Luftwaffe dropped a string of bombs on Clevedon. Private William Wraith of the East Yorkshire Regiment had just exited the cinema when a bomb landed roughly where you are standing. He and his girlfriend were injured. Sadly, Private Wraith died the next day in the Cottage Hospital. 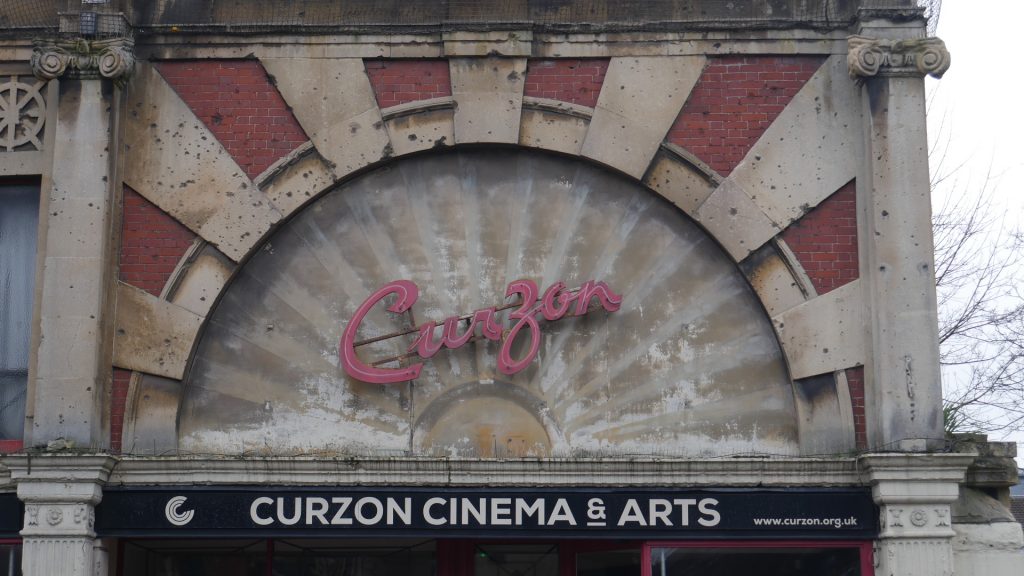 Stop 7: Fighting Slavery. Here you can read a memorial to Fred Durbin, a Clevedonian who fought and died at the Battle of Gettysburg in 1863. Fred was serving with the 78th New York Regiment and is buried in the National Cemetery where Abraham Lincoln delivered his famous Gettysburg Address about six months after the battle. The memorial is inscribed on the gravestone of Durbin’s parents. 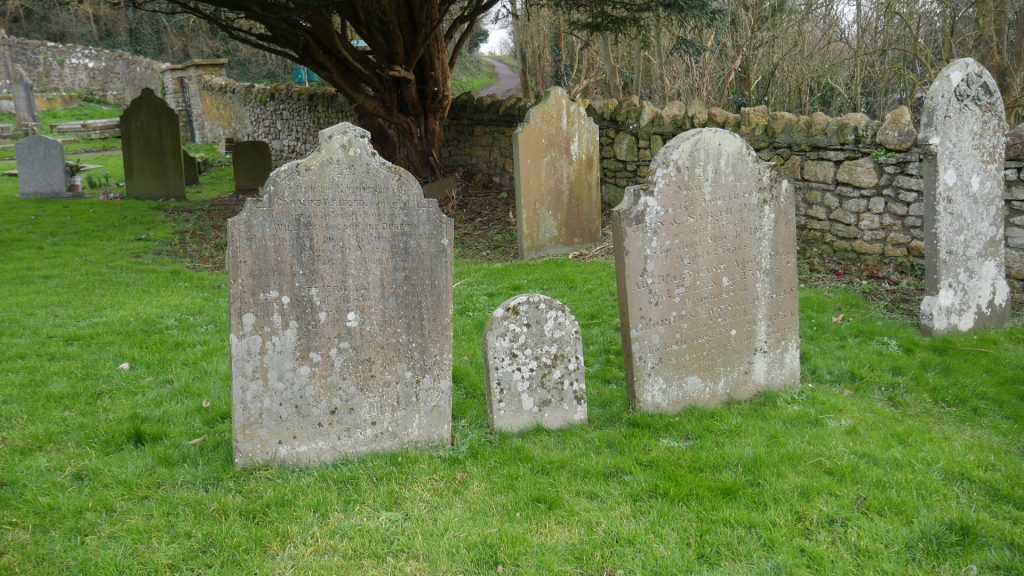 Leave the churchyard via the side gate which is to the left of the church door. As you pass, look out for the Royal British Legion memorial plaque which lies close to the church. Follow the road past the Town Cemetery where Private Wraith, mentioned previously, is buried under a Commonwealth War Graves Commission headstone (top end, middle of the cemetery). Once at the cemetery gate turn right and proceed down past the aptly named Battery Cottages looking out for a footpath marked as ‘Poets Walk’. Turn right onto the path and then, almost immediately, left at the information board taking the footpath up to Battery Point. 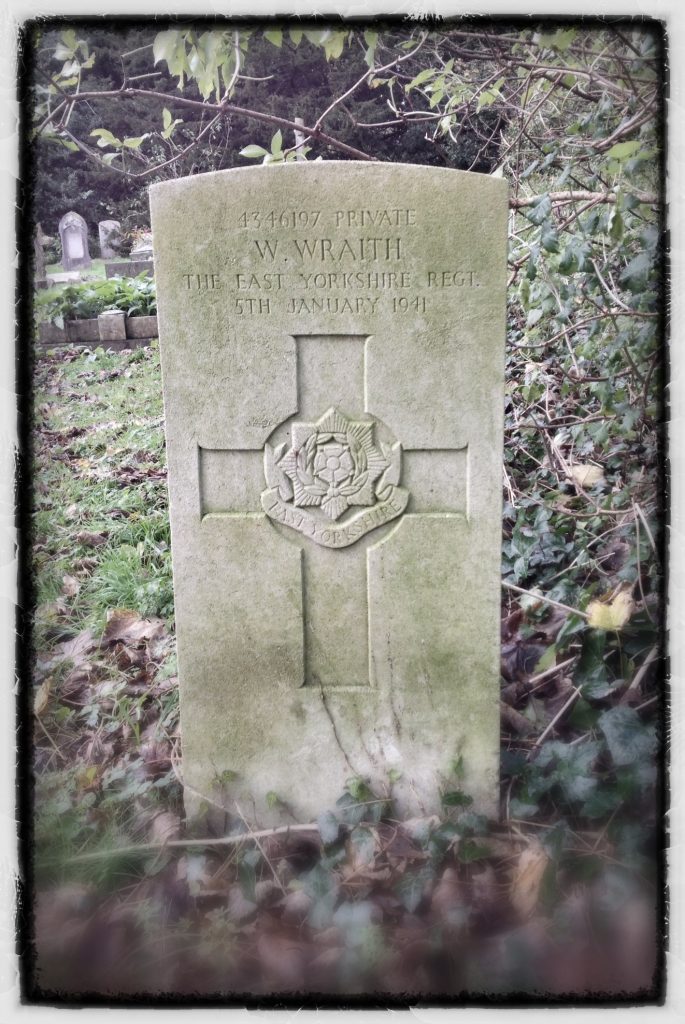 Stop 8: The Threat from France. The gun battery overlooking Clevedon Pill was strategically positioned to prevent landings on the foreshore below. Two gun platforms used from 1859-1908 can be seen along with their restraining rings. The decommissioned guns were removed during the First World War and sold for scrap in 1938. The brick building behind the battery was built and used by the Home Guard during the Second World War. 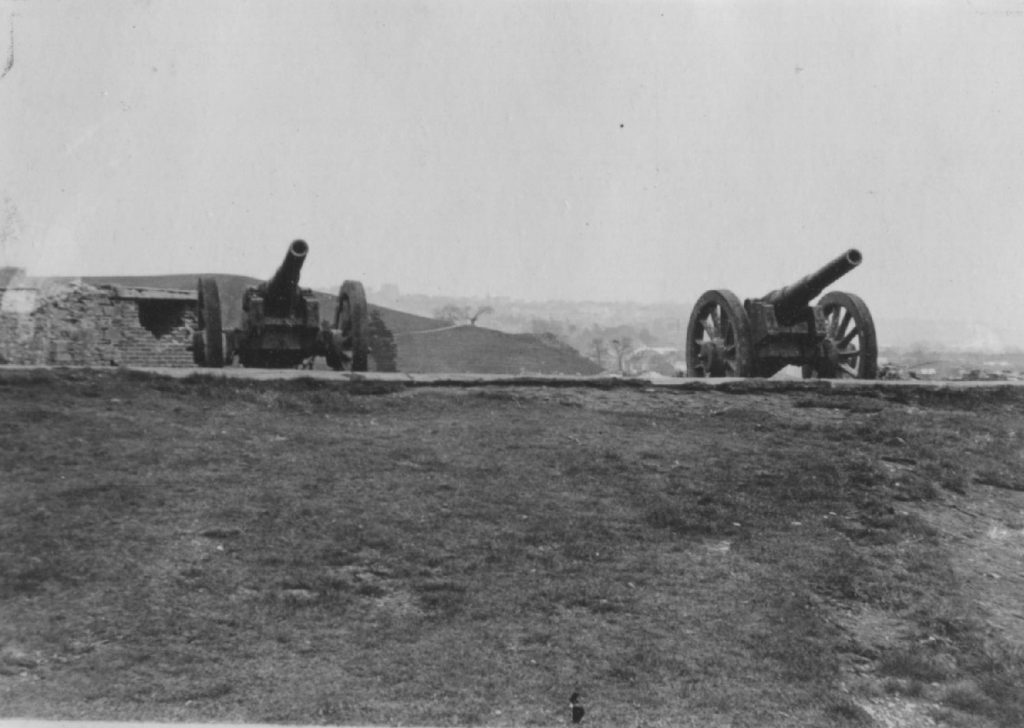 Leaving the site of the old battery, rejoin Poets Walk on the left and continue around the headland. At the top of the incline stop and admire the view. The coastal promontory on the other side of Woodspring Bay in front of you is Sand Point, part of which was a restricted military area until 2009. Throughout the Second World War and up until 1958 the area was used for special weapons testing. At low tide two shipwrecks can be seen. 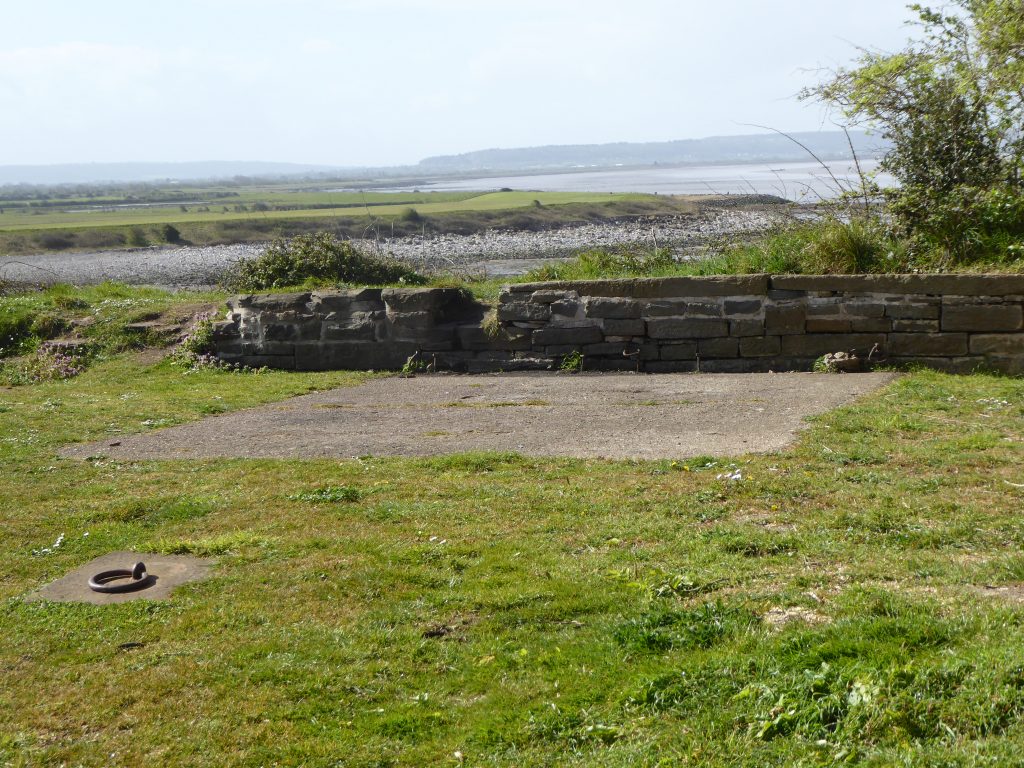 These are HMS Staghound and HMS Fernwood which were deliberately sunk and used for bombing practice. The higher promontory beyond Sandpoint is Brean Down at the tip of which there are a number of disused gun emplacements along with barracks and other buildings. For 150 years, Brean Down formed the eastern anchor of the Bristol Channel defences linking in Lavernock Point in Wales to the west and Steep and Flat Holm in between.

Stop 9: Spotting the Luftwaffe. Look up to the top of Wain’s Hill directly behind you and you will see a Second World War lookout post. The Luftwaffe used the Bristol Channel and the Severn Estuary as navigation aids during the Second World War. In addition, there was a need to identify unfamiliar merchant and naval vessels, including submarines. 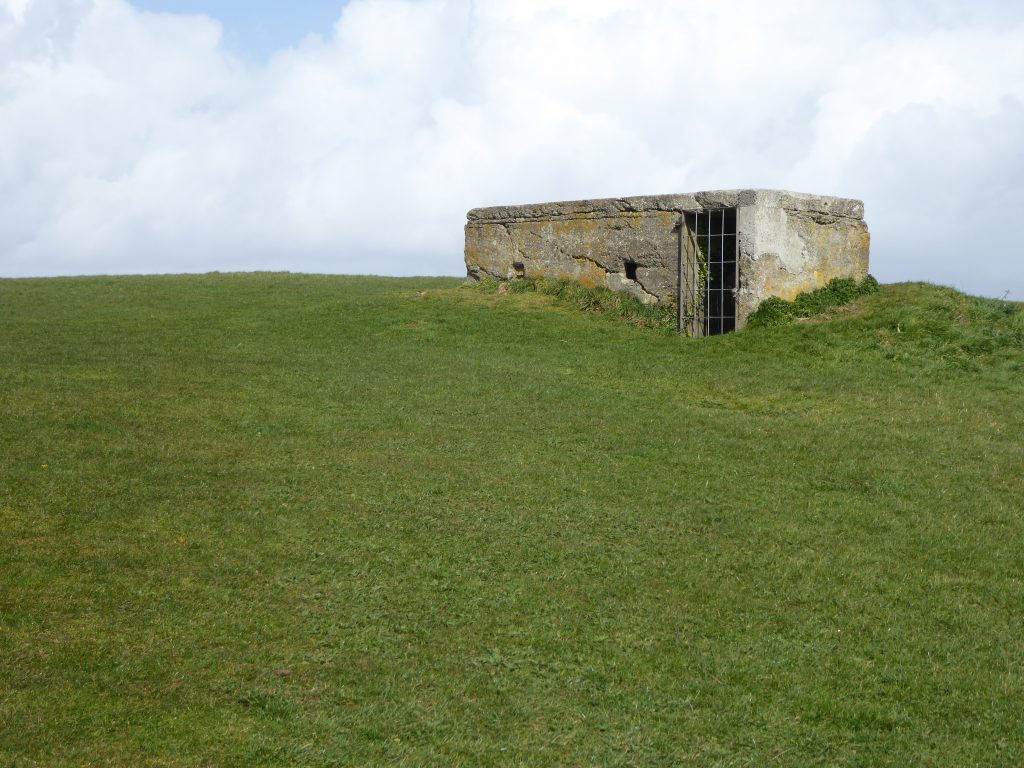 Continue on Poets Walk keeping an eye open for Clevedon’s historic Grade 1 listed Pier as you turn to the north. Step into the restored lookout tower on the left just before you reach the Marine Lake. Skirt around this popular bathing pool and walk the sea wall and promenade up toward the Pier. After admiring the Victorian Bandstand glance right at the modern flats known as ‘Oaklands’. This is the site of the old Oaklands Red Cross Auxiliary Hospital where over 3,500 casualties were treated during the First World War. Imagine the patients sitting on the seats on the green bank a little way along the promenade from where you are. 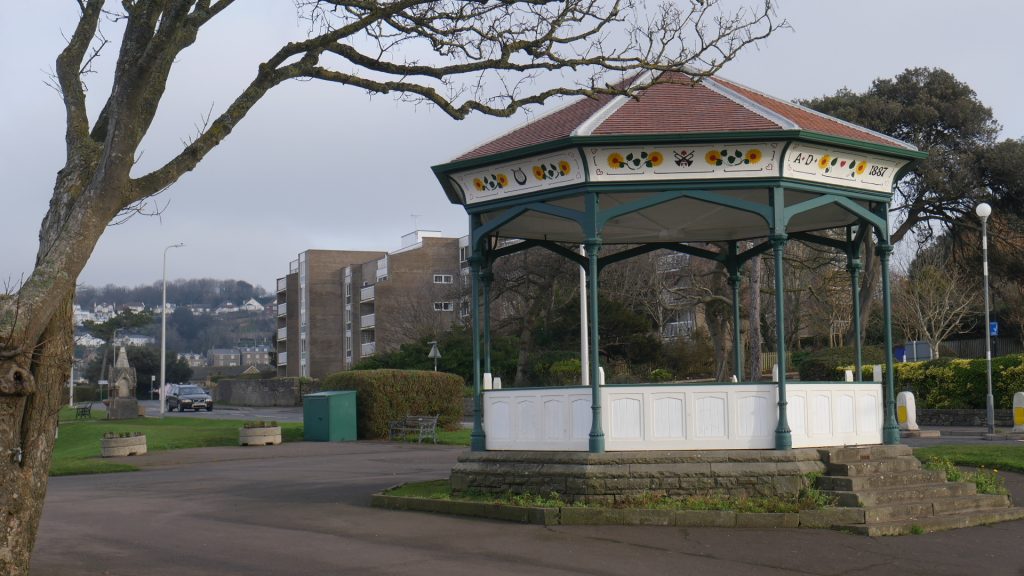 A little further on, to the right, you will see Clevedon’s Peace Memorial which is situated above a quiet spot previously used as a rest point for donkeys which were used for rides along the promenade in Victorian times.

Stop 10: The Peace Memorial. Locals will often challenge visitors who refer to this striking column showing a dove of peace carrying a laurel wreath in its beak as a ‘war memorial’. It is in fact a plea for a peaceful world. The memorial, built in 1903, commemorates local men killed during the Second Anglo-Boer War. The names of the fallen are listed, along with the places in South Africa where they were killed. More recently the memorial has been adapted to commemorate those who died in the First and Second World Wars. 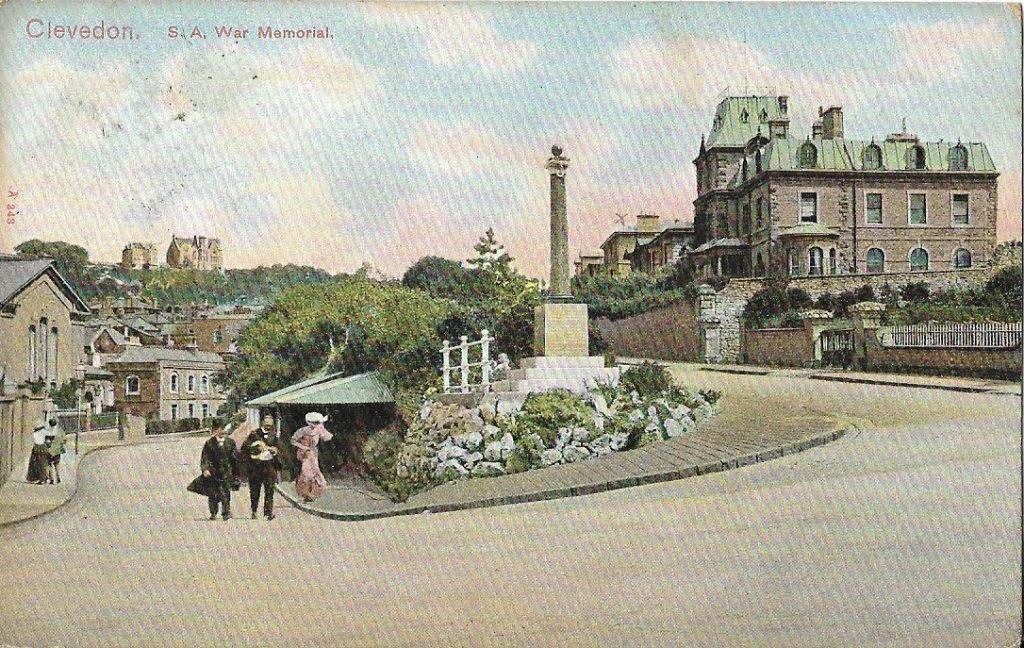 Stay on the promenade and walk up to the Pier enjoying the unspoilt Victorian seafront which is peppered with charming cafes and shops. Shortly before reaching the Pier, turn right into Alexandra Road and then left into the park known as Pier Copse. Take the steps up from in front of the kiosk and admire the views from the terrace above.

Stop 11: The Sunset Terrace. After the end of the First World War an Austrian howitzer was given to Clevedon as a war relic. For many years it was located at the top end of Pier Copse overlooking Clevedon’s beautiful Grade 1 listed Pier. Nowadays the terrace is a popular spot for enjoying sunsets and views of the Bristol Channel and the old gun is long gone. 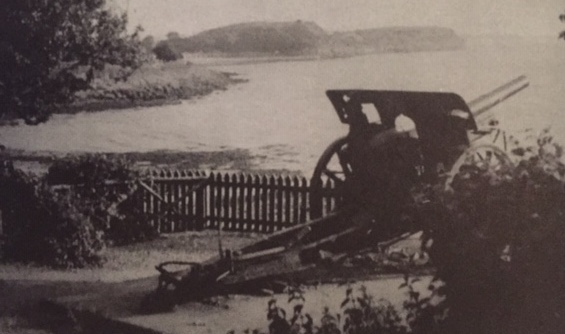 After leaving the park, walk up Alexandra Road and turn into Copse Road on the right. Proceed to the end and go up the steps directly in front of you. You will have passed Copse Road Chapel which was hit by an incendiary bomb in 1941. The damaged ceiling was marked with a swastika and you can still see the impact point though the Nazi emblem has now been replaced with a Christian cross. At the top of the steps turn left into Elton Road. Cross over and, after passing No.5 which was a Royal Navy School of Medicine during the Second World War,  look out for a blue plaque outside No.1. 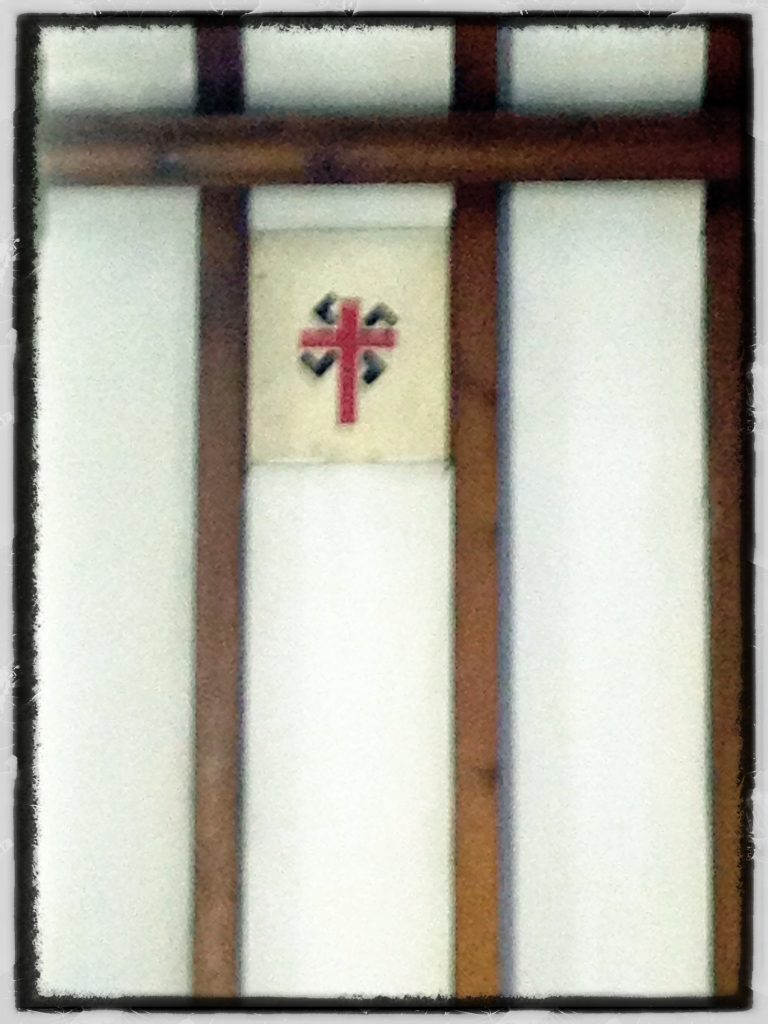 Stop 12: Shot for Treason. The blue plaque commemorates Nurse Edith Cavell who, despite considerable international pressure, was shot by a German firing squad for assisting Allied soldiers in escaping from German occupied Belgium in 1915. Nurse Cavell spent some of her childhood at 1 Elton Road, then a boarding school. The property is now a Bed & Breakfast establishment. 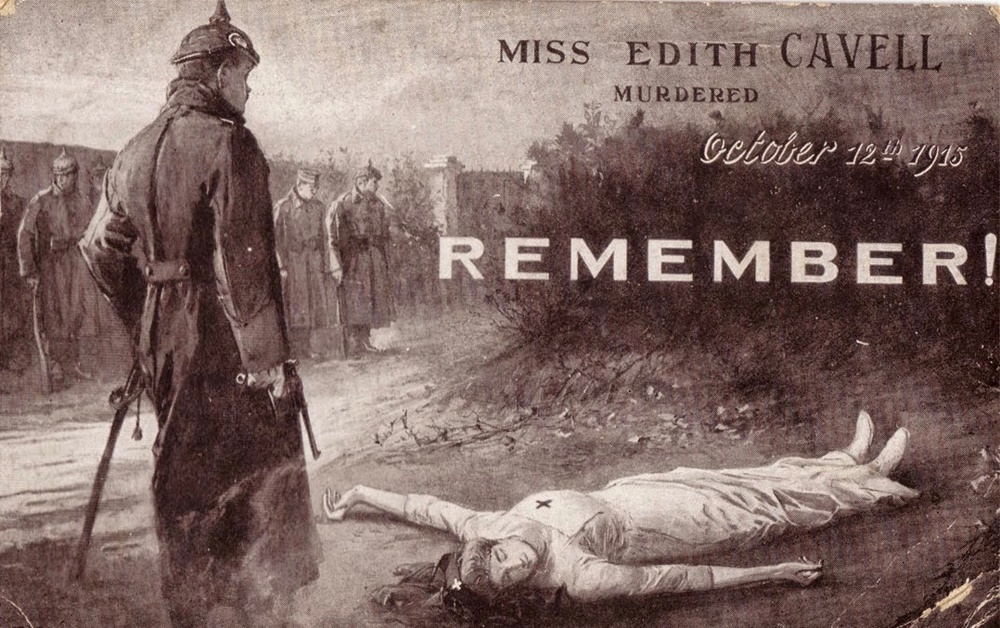 Return to Six Ways, just a few metres away.

For more guides to getting about Clevedon, see our Walking Guides

To read more from Phil Curme and his historic walking routes around the North Somerset area, follow him on Twitter and visit his website, Walking The Battlefields.