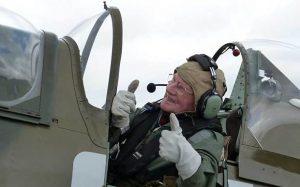 Flight Lieutenant William James “Bill” Green (23 April 1917 – 7 November 2014) was a British Battle of Britain Fighter pilot, who served with the RAF. Flight Lieutenant Green flew Hawker Hurricanes for 9 days during the Battle of Britain, between the 20 and 29 August 1940. During that time he was shot down twice: the first time on 24 August 1940, crash landing at Hawkinge and the second time on 29 August over Deal in Kent.

On joining No. 501 Squadron RAF on 19 August 1940, Green had flown only about 5 hours on Hurricanes and had only flown one for the first time the day before but was sent into action regardless on 20 August 1940. Green considers himself to have been one of the least trained pilots during the Battle of Britain and lucky to have survived.
He became a flying instructor, and though he had unquestionably done his bit, he started to feel guilty about not being on the front line and so transferred back to combat operations.
In February 1945 he was flying a Hawker Tempest fighter over Germany when, as he put it, “I zigged when I should have zagged, was hit, set on fire and parachuted out.”
He spent the remaining weeks of the Second World War in a German PoW camp, before being liberated by the American 5th Army.
He arrived back in Bristol at Temple Meads station on the afternoon of Tuesday May 8 1945, and was met by his parents-in-law. They took a taxi home to Weymouth Road in Bedminster where Bertha, his wife of five years, was waiting.
“When the taxi turned into Weymouth Road, it had to stop some distance from the house because the road was decked out for the street’s VE Day party.”
“Stepping from the taxi, I was somewhat embarrassed when all the party-goers stood up and cheered. If for no better reason than avoiding my embarrassment, I put my hand in my pocket to pay the taxi driver. He then said the following words, which stayed with me for 60 years: ‘I can’t take money from you, sir.’ And despite my persuasions, he wouldn’t – and didn’t.”

Bill later moved to Clevedon where he became Chairman and Managing Director of Reed International and Crown Paints, a high respected Boss, who knew everyone who worked there.